When I try describing my role as an M&A consultant to those outside the world of corporate finance, my go-to pitch is that I do what Richard Gere does in the 1990’s film, Pretty Woman. After a few raised eyebrows indicating that I clearly don’t have half of Gere’s charisma or good looks, this pop culture anecdote usually suffices… but truth be told it’s out-of-date.

Contemporary M&A inhabits a rapidly changing world. The speed and complexity of these changes reverberate throughout the ever-changing character of M&A’s subject matter - in modern business strategies, in innovative technologies, in discerning customer demands and in ever-increasing shareholder expectations. However, one constant remains. That constant is M&A’s insatiable demand for deal value creation and capture.

Given the pedestal on which deal value sits, it is ironic that very few organisations attempt to generate value until Day 1 of a deal; by which time it is too late. Too often, entities focus on value preservation activities at the expense of value generation activities. This is animated by many pre-deal activities but perhaps most colourfully by legal and financial due diligence exercises, which primarily seek to preserve present value or prevent future value loss, rather than generate additional value.

Value preservation is of course vital, but we think that deal value creation and capture require a more holistic approach. An approach which can effectively intertwine both value preservation and value generation activities throughout the entire deal cycle, from target analysis, to pre-deal due diligence, right though Day 1 into post-deal integration and beyond.

At Waterstons, we call this holistic approach ‘building a resilient deal’. Premised on our neoteric interpretation of resilience, which we have developed as a quadrant around the four canons of Protect, Adapt, Optimise and Innovate, we help clients create and capture tangible value. 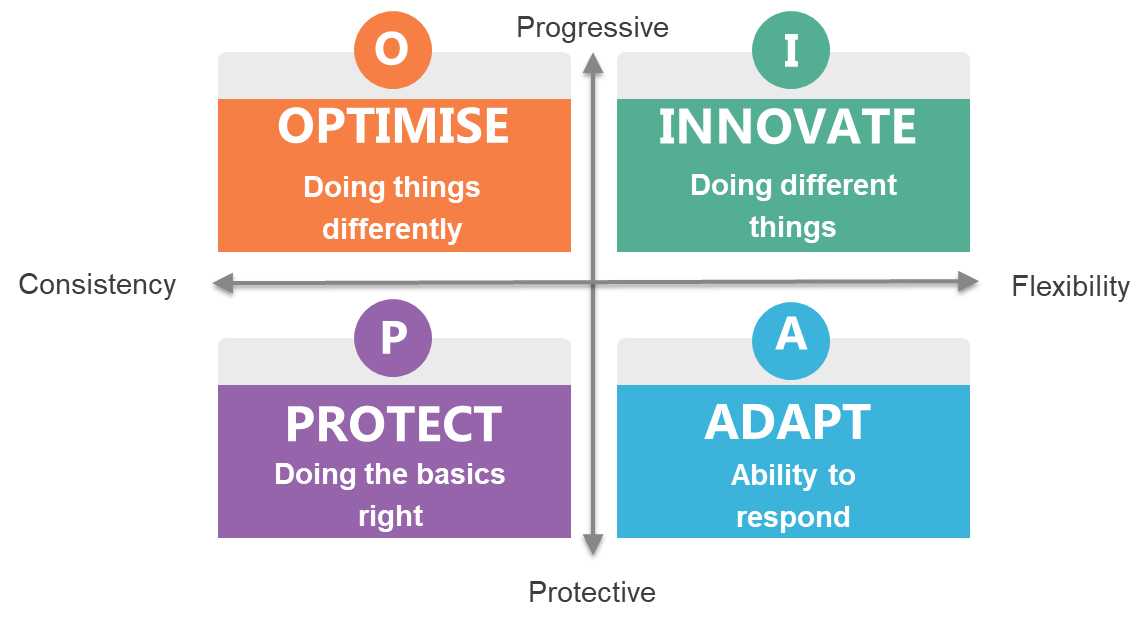 Traditional value preservation activities such as legal and financial due diligence fall squarely within the bottom two sectors of the quadrant of protect (doing the basics right, complying with legislation etc) and adapt (responding to challenges revealed during the due diligence). These are of course vital, but by considering them in a vacuum, you primarily protect the current value of a business and don’t focus on generating any additional value, as you are only considering the business as-is and not what it could be – making it difficult to deliver real benefits unless you have paid less than the intrinsic value of the business to begin with.

A holistic, resilient approach to value creation and capture will display attributes of all four sections of the quadrant. The more resilient a deal is, the more value you will derive from it by being adaptable to prevailing circumstances, challenges and opportunities; protecting current value; optimising current ways of generating value and implementing innovative ways of generating additional value. The question then becomes, how do you create or increase resilience in a deal? Luckily, the answer is simple.

In one way or another, modern businesses are heavily dependent on IT. There isn’t a business today which doesn’t rely on IT for its business operations, financial reporting, customer services or human resource management. By focusing on IT as soon and as often as possible, you create the foundation to identify what needs protecting; but you are also able to recognise what or how you need to adapt, what you can optimise and where you can innovate, in order to generate additional value. From this resilient foundation, if you have the right people in place, who are able to envisage what the future business needs to look like and how IT will facilitate that future state, you can begin to generate and capture tangible value pre, peri and post-deal.

…Now I just need to find a more up-to-date pop culture reference to explain what I do for a living.

Supporting deals through COVID and beyond

Ask the Expert: Digital in deals - Where should you focus the IT work?

The Digital Mindset – Harness the Digital Pragmatists in your Business